Staying alive in 2020 is a combination of community and thinking about the future. If we can see a purpose to our future, dealing with what we have to in the here and now is palatable. 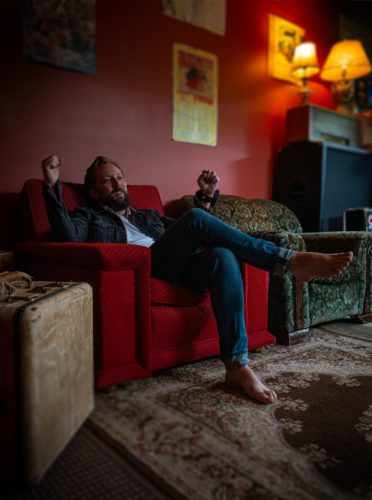 By the time I sign off from my afternoon streaming show this Saturday, I will have done four concerts from my residence.  Two in April, and two so far in May.  Most have been around the three hour mark. I’ve played your requests, debuted new material, and even dug around to the very bottom of the bucket for some of my oldest B-sides that never made the cut.  These little home concerts have sustained me spiritually, and thanks to your generosity, financially as well.

These times have hit my industry very, very hard.  Thanks to the ‘new model’, most of my contemporaries have been touring twice as hard as they did 15 years ago, and when COVID-19 hit, that revenue was taken away from not only the artists, but the agents, managers, techs, and of course, the venues.  For my next livestream show, I wish to share my proceeds with a couple of venues that I know are struggling and dear to my heart and an organization that is important to me.

But first, a story:

I’ve been told ‘no’ a lot in my career.  It’s character building.  When I was first touring the Dirty 5 band, I snagged a fairly reputable agent in Vancouver by the name of Rob Pattee.  We were touring the Better Days Gone By and Weeks Months Years records, and I still had a lot to learn about everything.  How to stay healthy on the road, how to be a better singer, and how to manage expectations of people and myself.  Rob got us our first couple of tours across the BC/AB border, but we weren’t to work together for long.  I became my own de-facto agent.  It was time for me to make calls to venues, promoters and agents.

I began by reaching out to a lot of the markets that I’d played before, and quickly found out that not having an already established relationship with some of these folks made it virtually impossible to get the gigs.  I was able to secure shows in Banff & Canmore, but for less money than I had gotten when I had representation.  I snagged a show in Edmonton for less money than it took to get there, and was working next on Calgary. 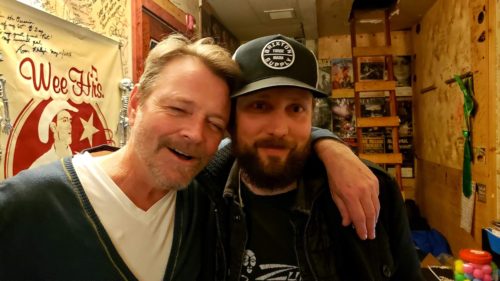 This is that SOB I was talking about… you can see how he could be a tough bugger to get along with.

Without naming names, I had had 5 venues tell me ‘no’ right off the bat.  I didn’t have a following. I didn’t have a single out. I had no chance of filling the seats. They weren’t wrong. I had heard of a place called ‘The Ironwood’ and they were to be my 6th e-mail.  It was run by a brash-talking, harmonica blowing, sarcastic whiskey-soaked SOB by the name of Patrick MacIntyre.  He was and remains honest.  He said we wouldn’t draw, but that he liked the music.  I think I asked for a Tuesday or Thursday, and he gave it to me.  We made it to Calgary, played our hearts out, and a friendship was born.

Patrick and his staff are incredible folks. They’re one of those venues that absolutely puts the music and the bands FIRST.  I’ve played both ‘Ironwood’ locations that have held prominence in the ancient Inglewood neighbourhood of Calgary, and every time it’s a singular, unique and special experience for me, and hopefully for the crowd too.
Right now, like all venues, the Ironwood is empty and can use our help. 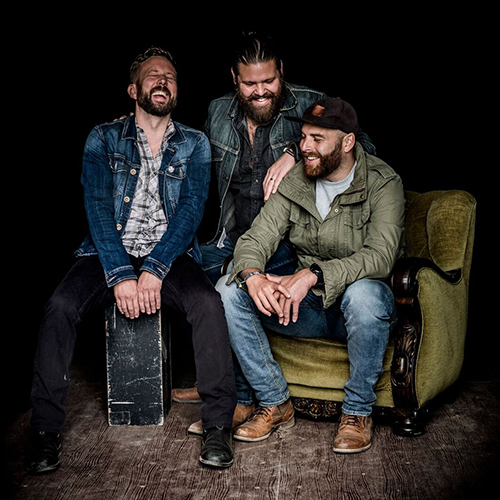 w years before I joined Lion Bear Fox, I started hearing about a lot of my peers and heroes playing a little place in Penticton called the Dream Cafe. It had hosted names like David Lindley, David Francey, Ron Sexsmith,   Matt Anderson & Tom Wilson.  The good folks at the Dream would receive about an e-mail a year from me for 5 years, always responding with a kind decline, until one day they gave Lion Bear Fox a ‘yes’.  They really made me work for it, but now the show was ours, and I was thankful once again for my tenacity.

LBF played the show; gave our all, did our encore between the tables in the crowd, and had the boss in happy tears at the end of the night, saying it was one of the finest shows he’d seen in his room.  The Dream has changed hands, but still contains that magic I felt that night.  It seats just over a hundred people, and you can turn it up & rock out in there, or you can tell a five-minute story about the day your daughter was born, and the audience is there for you every time…  Every word & every note.  Between LBF & my solo project, I’ve played there about 10 times.  It’s a very, very special room, and I encourage everyone from or visiting the Okanagan to check it out when we’re allowed…. but for right now, the Dream Cafe is empty and can use our help.

Now, let’s talk about OSAC (Organization of Saskatchewan Arts Councils). In a province where the land mass creates reaching the one million people who live there a logistical nightmare, a group of people decided to get together and provide a touring structure. In 2016, Lion Bear Fox was given one of the coveted spots on the tour. We visited seventeen rural communities. To plan and execute these tours without OSAC, would be damn near impossible. Small Canadian towns like Kamsack, Indian Head and LaRonge would be hard pressed to get to and, I believe, these are the places that benefit the most from the inspiration that music can bring. I remember in one town, one of the teachers at the school sent us a video of the entire class singing Hold My Love. When we arrived and performed, I couldn’t wait to get to that song and hear all of the voices sing along with us. OSAC has offered to partner with me to get the word out and ask their presenters to join me in assisting the venues that need help… but more importantly for them, the support for artists during this time.

Unison does amazing work caring for the music industry.

Which brings us the Unison Benevolent Fund.  UBF exists to provide counselling, financial aid and emergency assistance to those in the Canadian music community who face financial or personal hardship or economic difficulty.  I’ve never been in a position where I’ve needed them, but I know plenty of artists just like me who have been.  It gives us all a sense of relief to know that Unison is there for us, should things go sideways… like right now, for example.

On Wednesday, May 27th at 6pm PST, I will take to the internet again, this time playing music for those who have helped me and enriched my musical journey.  All proceeds will be split half between the venues (Ironwood Stage in Calgary, Alberta, the Dream Cafe in Penticton, BC) & the Unison Benevolent Fund. 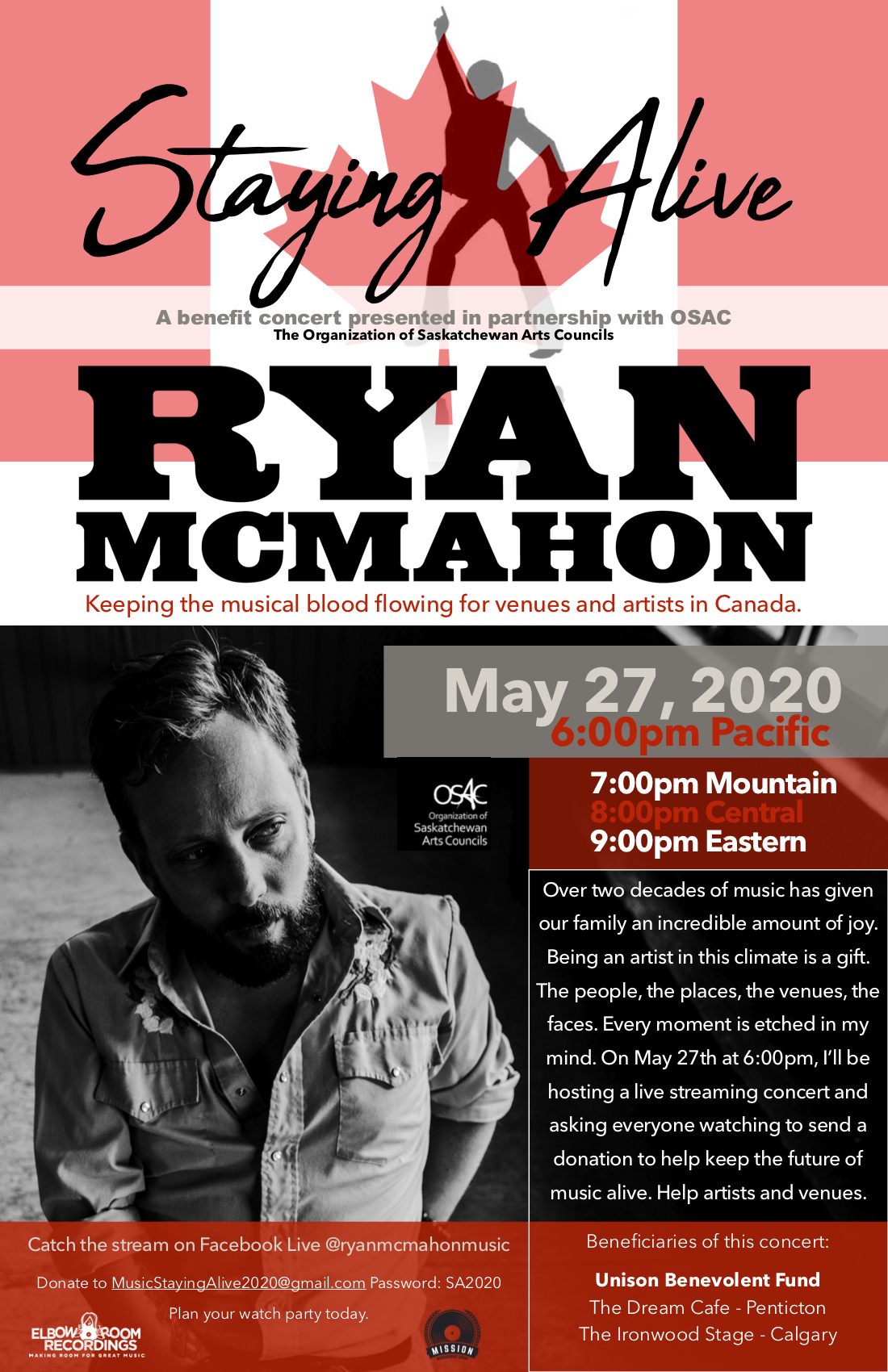 Join us on May 27th to bring music into the future of venues and artists.

If you’ve read this far, here’s just a little more:

I have led a very charmed life.  I have a wonderful family & a few very loyal, incredible friends spread out all across Canada & beyond.  A life in music has seen its challenges, and I’ve wanted to abandon it as a career a few times, but here we remain: It’s 2020, the world is on fire, I’m 40 and I’m a songwriter.  I’m still here, and I need music more than ever, and my hope is that you do too.  In your homes, and in venues in your communities.

I am looking forward to the days when we are all in the same room together, laughing, dancing, swaying and sharing the songs together.  Thanks for reading this, and for inviting my songs into your lives for all these years.

This entry was posted in Updates and tagged in #canadaperforms #unison #benefitconcert #together #futureofmusic.

« Just Your Dad Is An Understatement
Are You Alright? New, home-recorded music »